Today was a day for museums. I first planned to visit Musée national du Moyen Age. This museum is in the 5th, so was a metro trip to Odéon for me. I decided not to catch the metro at my own stop (Lamarck-Caulaincourt) but to walk to Marcadet Poissoniers so that I didn’t have to change. It’s nice to be above ground as much as possible.  You see things you’d miss otherwise. I was walking along rue Caulaincourt when I was suddenly walking over the Cimetière de Montmartre. I found the stairs down to the entrance and spent some time poking about in the cemetery. I wish I’d had a list of all the famous graves I could have visited – Offenbach, Degas, Delibes, Nijinsky. At least I found Hector Berlioz!

That was a good diversion from my allotted destination but I was eventually on the metro then deposited at Odéon. Once I’d oriented myself (I get lost so often despite having a map) the museum was easy to find – well-signposted. The most famous exhibit is the series of tapestries The Lady and the Unicorn, but there are many other delights in the museum if you are interested in things medieval, as I am. 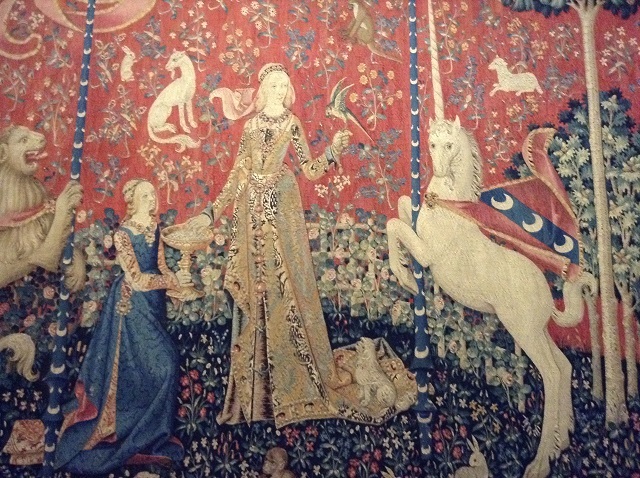 My next visit was to the Musée Picasso in the 3rd arrondissement. It’s a warm space with the exhibits laid out very well, and although it was busy there was no difficulty in seeing the paintings and other objects with a little patience. I think Picasso had a great sense of humour and found myself chuckling at some of his absurdities.

Unfortunately it’s the last time I laughed for days. I was resting and enjoying a coffee and snack in the museum’s café when a horrified gasp from the American woman next to me checking her phone and her breaking the news to her friend that there’d been a terrorist attack in Paris turned everything upside down. She didn’t know details so I imagined an attack on the metro or a tourist site. The attack was in the 11th, the next arrondissement over from where we were. I decided to walk as far away as I could so I think I walked to the 2nd and caught the metro back to Montmartre. There were no signs saying the metro was affected. Once I was home I watched BBC TV. It was not pleasant to be by myself.

I needed dinner so went to La Jolie Bohème, just up the road on the corner of the rue Darwin. The food was very good and the staff very pleasant. The pot-au-feu I ate was amazing – tender meat with masses of vegetables in a small casserole. I confess to drinking a bit more than usual. It was that sort of a day.